Bartali 180 is a unique cycling event created in memory of the great Gino Bartali.

Celebrating his life and heroic act during the Second World War.

Conceived by the creative mind of Ran Margaliot, Co-founder of the Israel Cycling Academy Team, and supported by the Co-founders of ChronoPlus, Gabriele Mirra and Paladino Meschi.

The event, sponsored by Comune di Firenze, Comune di Assisi, Save the City and Israel Cycling Academy, have got together to support the

Bartali 180 – is a non-competitive ride that will take place in Italy on Semptember 8th, starting from Florence and ending in Assisi. The event will see a group of cyclists gather from all over the  world, cycling together along the mythical path that Bartali used during his “secret journeys” on behalf of the “Assisi underground”, while smuggling fake documents hidden inside his bicycle frame.In this one-of-a-kind event, you will live and experience the incredible journey that Gino rode as part of his role in saving hundreds from the grasp of the Nazi’s. 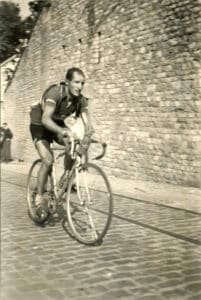 Along the participants, you will also find special guests of honour: Gioia Bartali – the grand-daughter of the legendary Bartali -, Paul Minikes Alexander – one of the youngest Kindertransport refugees -, Aili McConnon – author of the book “Road to Valour: Gino Bartali” -. There will also be young Students from the “Gino Bartali Youth Leadership School”.

Participation in the first edition of the event is open to a maximum of 150 keen cyclists. The aim of this event, besides providing the opportunity to practise the sport we love so much, is to create a festive and memorable occasion so that one of the darkest periods in the history of humankind may not be forgotten, and to acknowledge and bring to light the feats and heroic exploits of one of the greatest cyclists of all time to as many people as possible, from far and wide.

While Italy was on the verge of defeat being invaded in the south by the Allies and in the north by the Nazis, people were living in such unsettled times. Immense cruel atrocities were being committed in front of people filled with disbelief, sadness, and helplessness.

In dark moments like these the only possible light can come from inside of us.

Bartali was one of the shining stars, whose act of kindness,

This humble man when asked if he knew he was a hero, would answer with the following words:

” Real heroes are others, those who have suffering in their soul, in their heart, in their loved ones.

Those are real heroes.

This cyclist was and will continue to be a living legend, that shined not only during races but also as a human being.

ChronoPlus feels honoured to be celebrating Gino Bartali‘s life, as for us, he is not just a champion and a hero, but also a teacher of life, from whom we all could learn.